Home › College Football › Cardinal Rule; Why Stanford May Be the Key to Conference Expansion.

Cardinal Rule; Why Stanford May Be the Key to Conference Expansion.

I’ll admit it; the possibility of conference expansion is a full blown obsession for me at this point.  After maligning the Big 10 and the Pac 10 for thoughts of expansion and a conference championship game money grab, I’ve moved through my own twelve step recovery plan that included denial (the Big 10 will stick with tradition), to acceptance (this thing is going to happen) to a fanatical detachment from reality (Texas is joining the Big Ten as part of a 16 team super-conference) to anger (time to beat a dead horse in the form of a little green leprechaun), to a return full circle to plausible deniability (my spell checker says that this is not a word, but I don’t believe her).

Now that the dust has settled, I’ve cleared my head and I’m thinking a bit more rationally.  And I have promised myself that I would write an article that would not be dominated by my obsession with the revenue generated by college football (it’s a personal goal of mine to write an article that does not make reference to the revenue generated by the Big 10 Network last year–wish me luck).

Like all things in life, I think the conference expansion talk is pure gamesmanship by super-wealthy men wooing college institutions like little kids threatening to swap bubble gum cards before racing home for dinner.  Just like the time I gave away my Reggie Jackson card for a can’t miss kid by the name of Dan Pasqua, I worry that one of the commissioners might blink and do something seismically stupid in the name of progre$$ (or at least that’s what keeps me up an extra five minutes at night).  Just like the prisoners’ dilemma, it’s my concern that one of the commissioners might make a terrible decision and screw everything up out of fear that the worst result might stem from somebody else doing it first.

I do believe that the Pac 10 would like to expand, if only because the conference  lacks TV revenue and consistently relevant football programs other than U.S.C.  (does anyone else in the country watch any other Pac 10 team besides the Trojans?).  Because of this, expanding to twelve members and hosting a conference championship game makes too much sense for the Pac 10 to not do it.  I do not believe that Larry Scott was hired simply to maintain the status quo; he has said that his product has been undervalued for years, and he might be right.  But in the end, it may not be his decision, or more aptly put, even the decision of the majority of the university presidents in the Pacific Ten Conference.  It may be one elite university that has only a passing interest in gridiron contests in the first place that will determine if conference expansion happens at all in any of the conferences.

First, some thoughts that I think I think are correct.  The Big 10 will not expand unless they find a program that significantly alters their landscape (that means Rutgers and Syracuse need not apply).  If they expand to just twelve teams, the only schools that make sense are Notre Dame and Texas.  This is so because both of these programs would open up new media markets that would increase the gross revenue enough for the conference as a whole, and sharing the already established wealth with another university that can’t increase the size of the pie likely will not appeal to the present members (I came close to talking about the specifics of Big 10 Network revenue, but I resisted).  While Pittsburgh and Missouri are decent enough schools, the Big 10 already has plenty of decent schools that lack sex appeal (and by sex appeal I mean schools from average to big size TV markets that could significantly contribute to the TV revenue pot).  Notre Dame will pass, because, well,  they are Notre Dame; their shit’s just too damn sweet smelling for the Big 10 Outhouse, or so they would have you believe.  I believe that I have beat this horse to death, but if you have missed it, check out this link.

As for Texas, I never thought that the Big 10 really thought that Texas would ever seriously entertain such a move, and thus never even bothered to offer them (and according to Texas, the Big 10 has not approached them, and yet, they still felt the need to publicly reject this non-offer).  Instead, many believe it was a shrewd move on the Big 10’s part to include Texas in a leaked media report as an opening gambit.  One theory goes something like this; suggest that maybe you would consider inviting three teams from the Big 12 to join your new super conference, say Texas, Texas A&M and pick either Nebraska (better football tradition) or Missouri (probably bigger TV markets, St. Louis & Kansas City).  Such a move would cause a domino effect that would cause the Big 12 to crumble, with teams scrambling for new assignments.  When this happens, Colorado might join the Pac 10.  Needing replacements, the Big 12 could steal a Mountain West team or two, say a school like TCU, weakening if not destroying this conference altogether (some have suggested that the Pac 10, looking to add two teams, might also take either Utah or BYU from the Mountain West, or even Boise State from the WAC).  In other words, complete and total conference chaos.

Should the Big 12 be threatened, some argued, maybe Texas would seriously have to consider relocating, and the Big 10 would be financially as good as any place for the Longhorns to land.  This might not work because Texas is shrewd enough to realize that they would be the crown jewel in this scenario; reject the overture and the Longhorns could remain right where they are.   There is another way that this perceived pressure could be applied to Texas; maybe the Pac 10 starts the ball rolling by first picking off Colorado.  Should this happen, a jump by Texas could possibly be sold politically as a necessary reactionary move by the Longhorns (hey you can’t blame us, the Big 12 is crumbling!).  Or, still yet another theory, maybe the whole idea was simply advanced to make Notre Dame think that all of this was really possible.

And any or all of this could have happened but for the Stanford Cardinal.  See, if the Pac 10 needs to act first to set the dominoes in motion as described above, then rest assured that the conferences three years from now will look exactly like they do today.   That’s because the Pac 10 decided a long time ago that changing their conference structure by adding or removing a member requires a unanimous vote, which is another way of saying that it isn’t going to happen.  It’s my rule of 3; when more than three people are asked to come to a consensus on something, you might as well forget it.   It was that very same Stanford Cardinal after all that rejected a Texas bid to join the Pac 10 at the end of the eighties (can you imagine how much money not adding the number one grossing college football team in the country has cost the Pac 10?), presumably because of academic concerns, and it’s that same Stanford Cardinal that most likely will block any attempt by the Pac 10 to expand it’s membership further circa 2010. 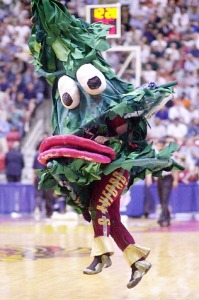 I mean, when you choose this as your mascot, how much do you care about athletics anyway?

It’s why I chuckle when I hear people suggest that maybe the Pac 10 would add a school like Boise State.  Could you imagine an elite university like Stanford allowing such a third tier school to join their conference?  If you can, then you do not understand all things Stanford (point noise upward and pronounce stan-FERD).  You see, Stanford has approximately $1 million dollars in research grants for each student enrolled at their small private exclusive (read snobby) university, meaning that their football program is truly the equivalent of the community softball league; an activity for a handful of oddball deviants on campus that has little appeal for the rest of the student body.  Stanford could scrap their football program tomorrow and the absence of these games would barely be noticed by the few thousands of student loyalists that even bother to attend them.  And because of the research grants, Stanford would hardly miss the revenue generated from their football program, a paltry sum by comparison.

For Stanford, the decision to expand would almost entirely turn on the quality of the academic institution being considered.  If you want to bring us a Harvard, Yale, or the University of Chicago we’ll listen, but you can go ahead and keep your Colorado  Buffalos or Boise State Broncos Stanford might say.  This is precisely why Mr. Larry Scott has already floated the possibility of challenging the NCAA rule that a conference must have 12 teams to host a championship game; he knows his conference will not have 12 members any time soon.  And if Colorado does not leave the Big 12 for the Pac 10, and the Big 10 does not go after Nebraska or Missouri, then the Big 12 is safe.  That means that not only will Texas not seriously consider leaving, but Notre Dame will not believe for one second that the sky is really falling.  And without such a threat,  Notre Dame’s athletic director Jack Swarbrick will never be able to convince his peeps that forsaking independence is a necessary evil, despite how much money Notre Dame will be leaving on the table.  And it’s my guess that the Big 10 will not seriously entertain expansion from a list of schools that includes Missouri, Nebraska, Syracuse, Rutgers, or Pittsburgh.  Simply put, not enough money in such a move to justify splitting their existing pot a twelfth way.

In other words, while it’s been fun to talk about, the NCAA Bowl Subdivision may look exactly the same three years from now.  If so, we may have the Stanford Cardinal to either blame or thank for it.

Like Loading...
‹ An Open Letter to Notre Dame Fan; Please Check Your Arrogance at the Door.
Fixing the BcS, AKA “The Bowl Conspiracy Series” ›

This site uses Akismet to reduce spam. Learn how your comment data is processed.

Washington Huskies vs. Ohio State BuckeyesJanuary 1, 2019
Still the Grand Daddy of them all!!
Follow The College Football Blog on WordPress.com