Oversigning: The Dark Underbelly of the College Football Recruiting Process 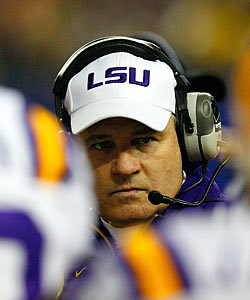 In 2010, Les Miles, the coach of the LSU football team, offered a freshman offensive lineman out of Waggaman (La) a scholarship to play football for the Tigers.    Fulfilling a lifelong dream, Elliot Porter signed and returned his letter of intent in February, qualified academically, and began taking summer classes.  Some two months later, Miles summoned Elliot from his dorm room to inform him that a scholarship wasn’t available after all.  Unable to afford the cost of tuition, Porter ultimtately transferred from LSU.   Unfortunately, stories like this are all too common in the high stakes game of Division One college football.

The practice that is now finally gaining some much needed attention is called oversigning, akin to the airline model of selling more passenger tickets than they have seats on a plane.  Coaches of Division One teams may not have more than 85 scholarship kids on their roster at a given time, which can make navigation difficult for top level schools that focus on the four and five star prospects knowing that in the end many will sign elsewhere.   Unlike the airline solution of bribing extra passengers to take other flights, D-1 coaches are either yanking scholarships altogether or forcing kids to take what’s called a greyshirt (no scholarship this year because of some purported injury with the suggestion that one will be available in the next class), forcing kids to either put their academic careers on hold or transfer to another school altogether.

The Elliot Porter story is hardly an isolated case.  Randy Shannon, former coach of the University of Miami, cut senior defensive end Steven Weasley, who had already been talked into taking a red shirt (which means you sit out a year to preserve a year of eligibility on the back end) when he needed to make room for a blue chip defensive back from Ohio named Latwaan Anderson (who is no longer on the roster by the way) and a high maintenance OL from Minnesota name Seantrell Henderson, who’s crazy recruiting frenzy was documented by the poleposition a year ago in this article here.  It didn’t matter one bit that Weasley did what he was asked to do on the field and in the classroom for three years—he was deemed expendable when the next can’t miss kid decided to enroll at the U.

Coaches are doing this because it gives them a competitive edge—a way to hedge your bets in case the blue chip kid you’ve been stalking for months decides to play ball elsewhere.  And make no mistake, schools that don’t do this are at a competitive disadvantage, as Ohio State was a year ago when the school ended up giving a scholarhsip to a walk on player when the much ballyhooed Henderson did the USC-Miami shuffle discussed above (the result was having a one star kid on the roster instead of two or three star guy which functions to limit player depth).  Since this makes sense from a competitive aspect, it’s unrealistic to expect most coaches to refrain from using the practice when there is no downside for either the coach or the school. 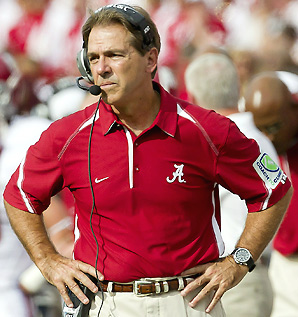 In explaining apparent oversigning abuses, Mr. Saban advised that every kid that left created his own exit route and that he didn’t even know how many scholarship players he had because the school doesn’t release such information.   Yep, nothing to hide there.

Recently, the Wall Street Journal did a story on oversigning, detailing four Alabama players who claimed they were forced to take greyshirts for exaggerated injuries while at Alabama, ultimately forcing the kids out of the program.   As documented by sites like oversigning.com, the problem is one of simple numbers: from 2002-2010, Alabama recruited 235 total kids, which averages out to 26.11 kids per class over that span.   While the number of kids recruited each year will not be static because graduation and attrition rates vary, statistically, a school should recruit 21.25 kids per year on average, meaning that over an eight year span, Alabama had to purge some 40 kids from their rosters.  Not coincidentally, in just his four years at Alabama, Saban has greyshirted 12 kids, or three per season (as a way of comparison, Jim Tressel, coach of the Ohio State Buckeyes in the Big Ten, has greyshirted just four players in his ten year tenure at Ohio State, leading one national pundit to wonder sarcastically why kids at Alabama are so injury prone).  In an effort to explain his actions, Saban claimed that every player who left Alabama created his own exit route, whatever that means, ultimately advising that he wasn’t really sure how many scholarship kids Alabama had on the books at any one given moment because the school doesn’t release such information (isn’t Alabama a public institution, and thus, since taxpayers are footing the bill, shouldn’t that be public record?  If the school can’t exceed 85 total scholarships without incurring an NCAA violation, wouldn’t someone in the school have to keep track of this information?)  In other words, you don’t want to know what goes into the sausage.

Let me be clear about one thing: while the practice of oversigning and greyshirting after the fact is a slimy business, coaches are operating within the framework set up by the NCAA, exploiting loopholes that allow this recruting binging and purging process to exist unchallenged.  The culprit in this debacle is the NCAA, who has continued to look the other way as these institutions are generating tens of millions of dollars in revenue through their football programs.  It’s not realistic to expect coaches who have multi-million dollar contracts hanging in the balance on the outcome of these games to self regulate (and efforts like those of the SEC to limit recruiting to 28 a year are laughable when you consider some years teams may only be recruiting numbers in the teens and low twenties because of low natural attrition rates–such limitations may slow down coaches like Missississippi’s Houston Nutt who once laughed during a press conference that he signed 37 kids, but that’s about it).

Fourtunately, the solution is not a complicated one.  As Pat Fitzgerald of the Northwestern Wildcats put it succinctly: “”We have 85 scholarships. We had 17 to give, and we’re at 85 right now.”   While there may be times when greyshirting makes sense for both sides, as when Ohio State disclosed up front to quarterback recruit Cardale Jones that they did not have a scholarship for him this year, but would have one next year, a sensible approach like the one implemented by the Big Ten in the 1950’s that allows signing over the 85 scholarship limit on a documented exception basis would end this unscrupulous practice of after the fact greyshirting.

At the risk of sounding just a bit naïve, it’s time the NCAA step in and protect these kids and acknowledge that at least to some degree this process is supposed to be about education.

Like Loading...
‹ The argument against a Playoff Model in College Football
How Football has become America’s past time ›

This site uses Akismet to reduce spam. Learn how your comment data is processed.

Washington Huskies vs. Ohio State BuckeyesJanuary 1st, 2019
Still the Grand Daddy of them all!!
Follow The College Football Blog on WordPress.com